Q1. Are there any ways to recycle desiccant that has already been used?

If the desiccant still available, it can be used for saving home food and shoes, etc.

Lime desiccant (RAYM) is grain and turns to powder after absorbing moisture. If there still have grain in the bag, the desiccant is still effective.

Silica gel and clay desiccant such as CAREDRY and UNIT PAK，can’t confirm there residual capability because their shape and color will not change.

If humidity indicating silica gel in the desiccants changes from blue to dark red, it has no effects then.

Q2. How to dispose desiccants？

It should be abandoned according to local allowed methods and regulations.

The chemical absorption desiccant （RAYM・DRYMAX）whose raw materials would possibly have exothermic reaction instantly when contact with water, so it can’t be thrown to washy place.

Q3. If eat the lime desiccant by mistake, how to deal with？

When calcium oxide contacts with water, it will react and release heat. If there is any burning indication, please consult to the doctor.

If the substance you ate is moisture absorbed slaked lime, just rinse your mouth. Slaked lime which is calcium hydroxide has no toxicity and is regarded as food addictives for foods.

But the aqueous solution is strongly alkaline and irritant to mucosa. Drink plenty of milk and water and consult to doctors.

Q4. If eating silica gel or clay desiccant(CAREDRY 、UNIT PAK) by mistake, how to deal with？

The chemical property of silica gel and clay is steady, they can’t be assimilated even they are eaten by mistake.

If eating by mistake, please drink a lot of water, milk or tea after rinsing your mouth. If entering eyes imprudently, please don’t rub and wipe, wash with the running water immediately.

Q5. If desiccants are boiled with the food and are eaten by mistake, how to deal with？

Desiccants are non-poisonous, so even they oozed out of the pouch after heated and boiled. They have no influence to human body. So don’t need special treatment.

If you really very worry about it, please consult with the doctor.

Q6. The desiccant expands very big in the food package, why？

The expanding desiccant is the lime desiccant, whose main element is un-slaked lime (CaO).

After it absorbed moisture, it turned into slaked lime [Ca (OH) 2], whose form changed from particles to power and volume increased by 2-2.5 times.

So while designing the desiccant pouch, our company has already considered the problem of its inflation. We strengthen the size of the bag, which effectively prevent the happening of sack broken.

Q7. How to distinguish using of desiccant and oxygen absorber？

The principle of desiccants of keeping food from dampness is by absorbing vapor inside the packing container to a low humidity.Oxygen absorber is by absorbing oxygen, which effectively prevent food from oxidation, changing color and mildewing.

You can distinguish and use them according to the property and storage purpose of the food. Below are examples for reference.

Q8. The category and features of desiccant

Desiccant can be classified into 2 kinds——- Physical desiccant and chemical desiccant.
The former (RAYM、DRYMAX) absorbing moisture by chemical reaction with water.
The physical characteristics of the later (Silica gel and clay desiccant [CAREDRY /UNIT PAK] is steady, it absorbs vapor by pores.

Q9. Whether the desiccants can be renewable?

The lime desiccant (RAYM) can’t be renewable because it will turn into slaked lime from un- slaked lime after absorbing moisture, the substance has changed.

DRYMAX turns to solid after absorbing moisture and can’t be renewable.

Silica gel desiccant and clay desiccant which contains CAREDRY and UNIT PAK will not change after absorbing moisture. It can be renewable after heating. Packages of desiccants are plastic film and non-woven fabric. They should be heated under the low temperature for a long time below 100℃.

Q10. What are the differences between Type A silica gel and Type B

There are two kinds of silica gel who have strong ability of absorbing moisture.
One is type A silica gel as long as put it under normal scope of low- humidity circumstance, which mainly apply to keep food and metal dry etc.
The other one—- type B, it adsorbs a large amount of moisture in high humidity and discharges gradually in low relative humidity. Type B mainly is used to control the ambient humidity.

Generally speaking, the silica gel desiccant we called is type A silica gel.

Q11. The silica gel and clay desiccant are both with physical absorption ability, are there any differences between them（CAREDRY/UNITPAK）?

Because both of them absorb vapor in the air through their pores, we call them physical desiccants.

Silica gel is a kind of material with micro-pores, which is made by a chemical process—– from silica sand in the soil to the high purity silicon dioxide.

Clay desiccant is a special substance with micro-pores, whose soil compositions are very active.
It is not harmful to the environment if it is separated from the sack and disposed to the natural environment.

Q12. After the bundle of desiccants is opened, how to maintain the remnants？

If you put the remnants like they are, they will constantly absorbing vapor in the air, which will decline desiccant’s performance.
So, you should keep them in the same bag and tie it tight with an elastic band, then put them in a relative shady and cool place.

Q13. Which is better between desiccant and oxygen absorber for preventing metal from getting rusty？

The forming reason of the rust which is mainly oxide is mainly the existence of oxygen and water (vapor), so long as remove one of them, it can play a preventing role.

If you choose oxygen absorber, you need packaging materials with high air barrier. If the bag is sealed not very well or having holes, oxygen absorber will invalid completely.
So you must be very careful while using it.
In addition, before using it, you must do some actual packing experiments for confirming, because different kinds of metal have different influences affected by oxygen absorber, which may change the color of metal surface.
You’d better use well-qualified moisture-proof packaging materials. Comparing with oxygen absorber, desiccant is more economical.
It wouldn’t lose the desiccant’s capacity completely because of unqualified heat sealing and small holes.
Well, no one is willing to see any problem. If you are still anxious about it, you can add a little amount.

Q14. Which type of desiccants is suitable for prevent metal from get rusty？

The raw material of silica gel is acid. Even separated by packaging materials, it is not suitable for keeping with metalwork for a long time.

The series of clay desiccant belong to non- deliquescent desiccants, whose PH index presents neutrality.
Even if they keep in touch with metals, the possibility of getting rusty is very low, so you can use them safely.

Q1. Does the oxygen absorber, which had put into food, can recycle?

Once the oxygen absorber used, it would lost its function, so it can’t be re-used.

Q2. How to dispose oxygen absorber?

At home, you can discard it as nonflammable garbage (organic oxygen absorber can be burnt, but it is difficult to distinguish it from iron series).

If it is widely used in industry, please deal with it as industrial castoff.

Q3. If ate oxygen absorber by mistake, how to deal with this kind of situation?

Iron series oxygen absorber will not be digested, even if it gets into the human body, it will be naturally excreted. Organic series oxygen absorber can be look as food additives, so it is relatively safe. So don’t worry, if you ate it by mistake, wash your mouth and drink some water, milk or tea etc.If you still worry about it, you can go to see the doctor.

Q4. When you take out of the oxygen absorber sealed in the food package, you may find it heats, why?

The organic material or the iron will react with the oxygen in the wrapping bag , which also release heat at the same time. If it still has oxygen absorption capability, it will continuously react and release heat, even it has already put out of package. But it’s safety and can’t give rise to any fire. It wouldn’t cause the situations such as sharp heat or scald.

Q5. Whether the oxygen absorber can be put together with food in the microwave oven for heating?

After heating, the oxygen absorber may be broken or cause fire. So it must be taken out in advance.

Q6. What are the classifications and characteristics of oxygen absorber?

1) Oxygen absorbers can be divided into two kinds: Iron series and Organic series.
The iron series reacts with oxygen and form rust, so the oxygen will be absorbed, and the sealed container will be have no oxygen inside.
The organic series can be used as the raw material of food additive.

The volume of carbon dioxide that released is almost equal to the volume of the oxygen that is absorbed, so the container will not shrink, and the soft and squashy food can be kept well.
The packed final commodity can pass the metal detect machine.

Please do actual packaging experiments in advance to confirm the result to get the best effect.

Choosing suitable type according to the goods activity of water and the time for packaging. However, different conditions corresponding to different varieties. Regarding to specification, use a little larger specification than the volume of air that be packed together with the product. Oxygen specifications of oxygen absorber can be indicated differently by air volume and oxygen volume in different manufacturers. They can approximate converted as follows:

Q8. How to prevent the outer packing from shrinking?

If oxygen absorber is used, probably, it would absorb oxygen which is 20% of the air in the packed bag. This causes the shrinking of the bag. The way to prevent this is as follows:

1) Using organic series oxygen absorber OC type
The volume of carbon dioxide that released is almost equal to the volume of the oxygen that is absorbed, so the bag or the container will not shrink, also the carbon dioxide has the function of bacteriostasis.
2) Using Alcohol Freshness Retainer
Alcohol has the function of bacteriostasis, so it can prevent mildew and keep the food quality well.
3) Using together with inactive gas
In order to prevent food from oxidation, you can use inactive gas such as nitrogen to replace the oxygen in the package.But, it is impossible to remove all the oxygen and the oxygen can infiltrate into the bag gradually. If you want to preserve your products for a long time, the inactive gas should be used together.

Q9. Whether the oxygen absorber has a function of preventing food from fermentation?

It can’t restrain propagation of anaerobe that caused by fermented fermentation.

Q1. What is the difference between oxygen absorber and fresh care？ 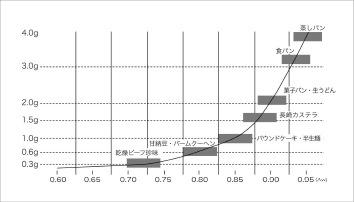 2022/5/11Please be careful about long-term inventory